Our Thanksgiving Adventures in Moab, Utah and Western CO 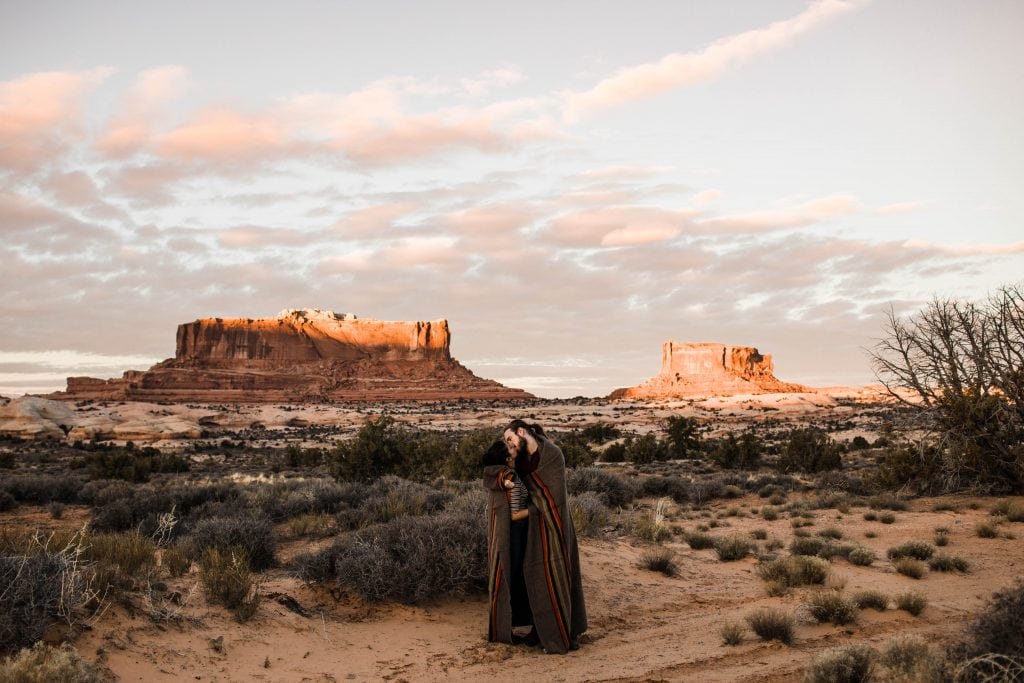 Our Thanksgiving Adventures In Moab

***Since publishing this post, I’ve noticed we’ve gotten quite a few visitors to this page who seem to be looking for advice on whether Moab is a good place to go around Thanksgiving, and what they should do there.

While this post is our personal story, I’ll also share some details on traveling to Moab during Thanksgiving for those who are interested! I’ll put those details and tips/tricks further down in the post, amongst the images below! ***

For those of you who don’t know, this holiday season has been a bit rough on us. In between all of the photography-related stuff we’ve been working on, we’ve been thrown some unfortunate curveballs. After a couple weeks away for weddings and workshops, I flew back home to Colorado on November 16th.

To celebrate the closing of a hectic fall season, Ed and I had plans to drive to Badlands National Park early the next morning and enjoy some time out in nature. But our plans were cut short when our car was hit out in the countryside of Wyoming, just as we were about halfway to our destination. The trunk was filled to the brim with camping gear and our pups were hanging out in the back seat. One moment we’re making a right turn, and the next we’re being pushed off of the road by the car behind us.

Let’s just say we were a lot luckier than our car was. Our car, which we had just bought back in March, was totaled. Our adventure-mobile. The car that had been with us on over 25,000 miles worth of adventures just this year. Gone. We watched as our favorite little vehicle was towed away, the backside mostly destroyed, except for the National Park stickers that littered the space below the back window.

We were shaken up, I won’t lie. We somehow got home that night, thanks to some amazing people that helped us when we had nowhere else to turn (let’s just say insurance said they couldn’t get a rental car to us until one or two days later, and we were stranded by the side of the road in the middle of nowhere in 8 degree snowy Wyoming weather).

After that, the thought of being in a car sounded terrifying. The whole ride from Wyoming to Colorado in the back of Ed’s uncle’s truck, I was sitting there, heart racing, wondering if something would happen. It was a long day and I tried getting some sleep in the back seat, but with every turn we took, my fear shook me awake.

We’d had plans to go to Moab, Utah for Thanksgiving, but with every passing moment, Ed and I realized that probably wouldn’t be possible…until it hit me. This was Thanksgiving. And we were ALIVE. We were so lucky that we didn’t look as bad as our car did, and rather than viewing this situation as a negative, we should have been using this as an example of why it’s so important to always keep pushing and adventuring and doing what fuels your soul.

And for us, that involved getting outside. So we talked about it and decided that we wouldn’t allow this situation to ruin our Utah plans. We would find a way to make it out into the high desert.

So we did. And boy did we have the most incredible time. We feasted our eyes on some of the coolest views we’d ever witnessed. We hiked up to some of the craziest overlooks. We danced under the desert moon. We watched the sun rise. And we watched it set. Our boots collected so much sand and red dirt that they basically changed colors.

Sure, we drove like snails the whole way out there, peering over our shoulder countless times before every lane change and turn. But we made it to our destination, and that’s all that really mattered. Deep down, we knew nothing was more fulfilling to us than chasing adventure, and no accident was going to get in the way of us doing just that.

So in honor of facing our fears and not letting them dominate us, I’ve shared some of the photos from our Moab trip. Despite all of the madness of the past month, all I see when I look at these photos is joy. We found our way to the place where we truly needed to be: out in the wild.

Disclosure: I’ve included helpful links to gear and lodging options in Moab, so your Thanksgiving trip can be as memorable as ours was. Moab is one of my favorite towns and I want your experience there to be epic, which is why I’ve included these links. I may earn a commission, at no additional cost to you, when you shop these links. Your clicks help support small businesses like mine, so thank you! 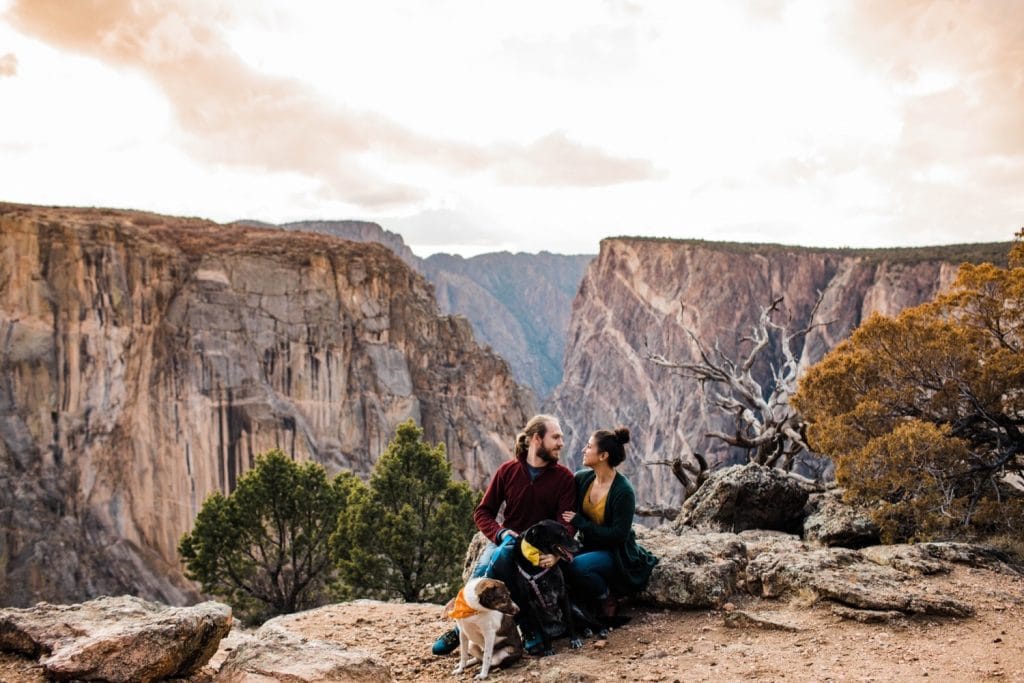 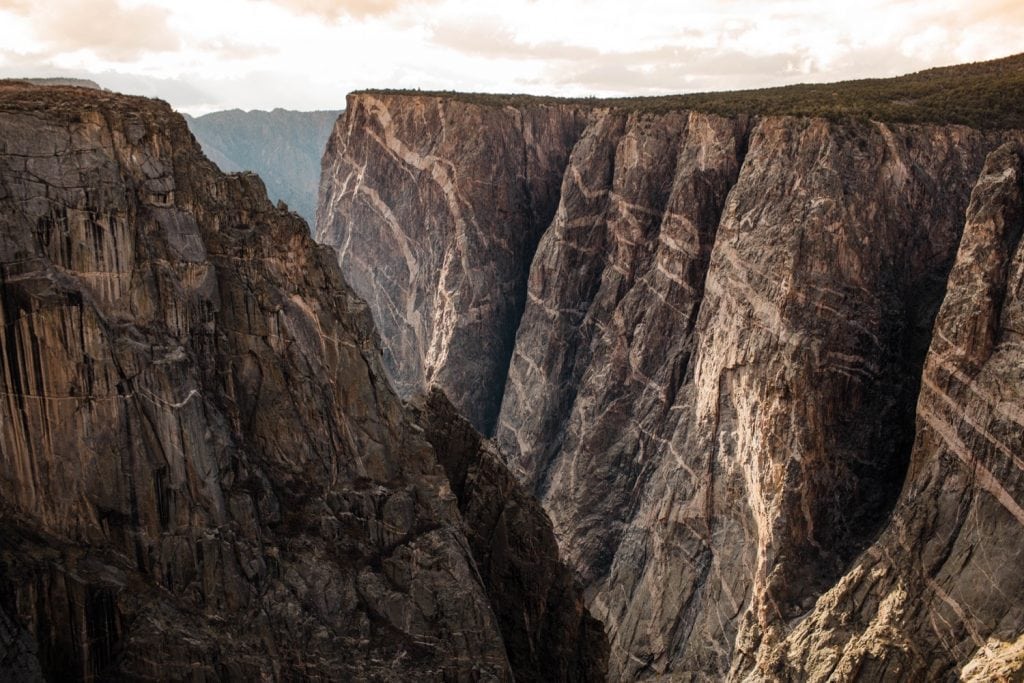 Is It Worth Coming To Moab For Thanksgiving?

Typically, Ed and I aren’t the type of people who go on vacation around the holidays. We don’t love large groups of people, and like to experience the national parks when they are the least crowded.

But we made an exception when spending Thanksgiving in Moab, for a few specific reasons. For starters, Moab is not the type of place you come to in the summertime. Triple digit daytime temps can make things pretty miserable.

Fall and spring are the seasons when Moab truly shines, making Thanksgiving a good time. That said, be aware that even though you’re in the desert, it can get pretty dang chilly in the early mornings and evenings!

Helpful Tip: When camping in Moab during the fall and spring, when temps can really drop when it’s dark out, our go-to is our wool Pendleton camp blanket. We always put it on top of our sleeping bags to seal in the heat, and it’s the warmest thing.

How Can We Avoid The Crowds In Moab During Thanksgiving?

Great question. As a photographer who photographs elopements in outdoors places like national parks, I make it my job to take people to busy places in times when they aren’t busy. And I treat our personal vacations, like this one, no differently.

Believe it or not, it’s possible to get away from the crowds, even during the popular holidays. The secret is getting outside at sunrise or sunset (but mostly at sunrise, if I’m being honest!).

Most tourists don’t want to wake up early and are usually back in town around dinnertime. For us, this is go-time. We live for the off hours. Not only are they less crowded, but they’re also much prettier (you can’t beat the good light during golden hour, especially in a place like Moab!).

That said, be wary of certain places that landscape photographers flock to at sunrise and sunset (e.g., Delicate Arch aka the Utah license plate arch). You can bank on there being crowds there at all times. But hey, that’s the reality of coming to a place like Moab during Thanksgiving. You won’t be able to completely avoid crowds.

Another pro tip? Explore some of the BLM land and lesser trafficked parts of Moab. Bring a Jeep (or rent one!) and go off-roading. Take a dirt road out into the desert.

Moab is so much more than just Arches and Canyonlands. And while it’s definitely worth it to visit each of those parks, there’s much more out there on unnamed roads. Find your own secret spot and set up a little picnic to watch the sun set. 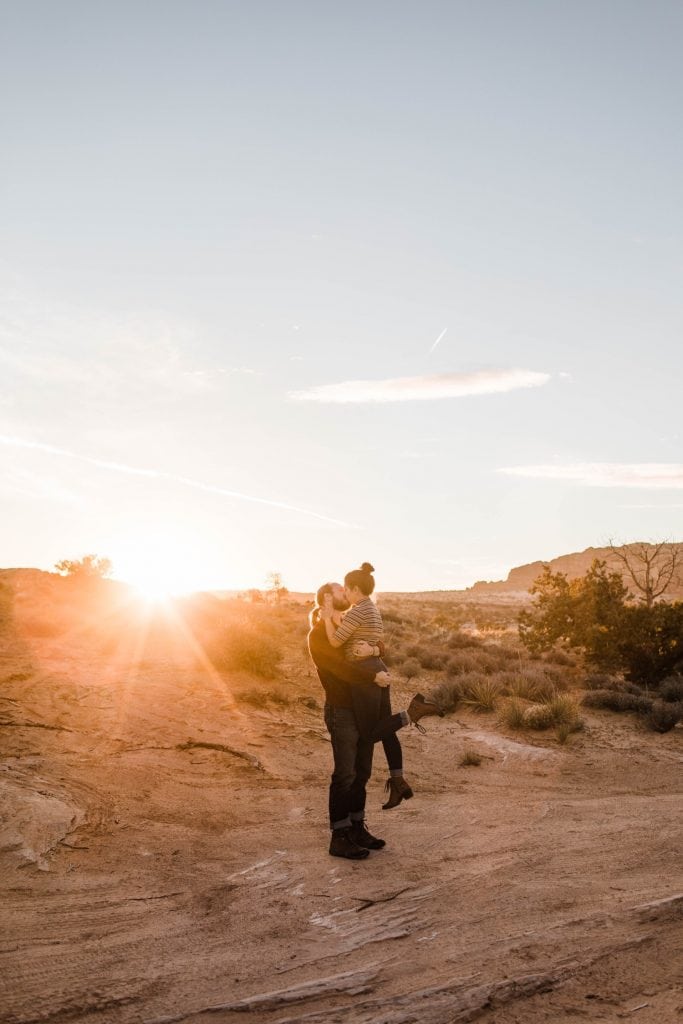 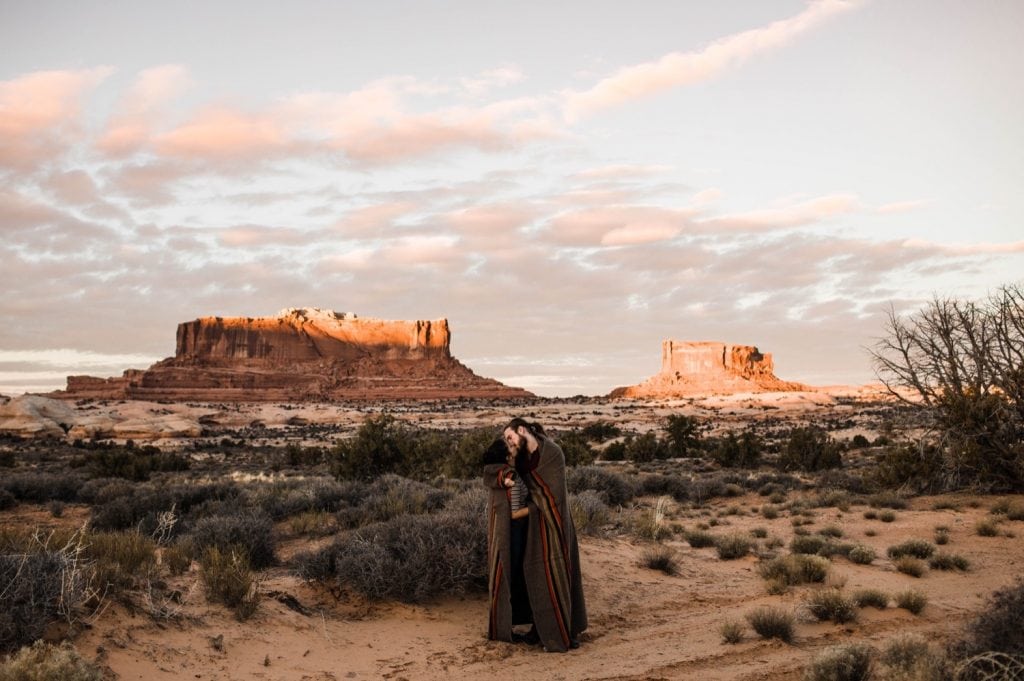 Where to Stay in Moab at Thanksgiving

Not sure where to stay in Moab at Thanksgiving? If you’re looking for Moab lodging, I’d highly recommend booking sooner rather than later. Moab hotels book up quickly for Thanksgiving!

I’ll drop my recommendations below to get you started!

For hotels, the Element Moab (very modern feel and stellar guest ratings) and the Fairfield Inn & Suites by Marriott (another extremely high rating hotel with a killer swimming pool).

If you want more of a private Airbnb vibe for your Moab Thanksgiving adventures, definitely check out Moab Springs Ranch, Kokopelli West, and this awesome family friendly apartment near downtown Moab, with a fire pit and hot tub. 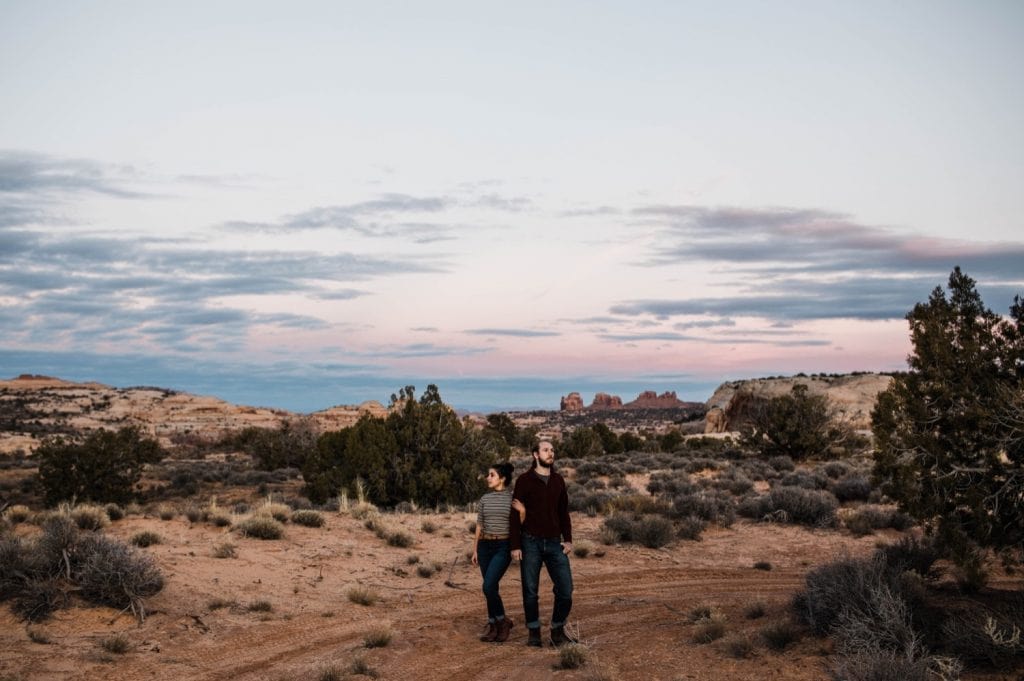 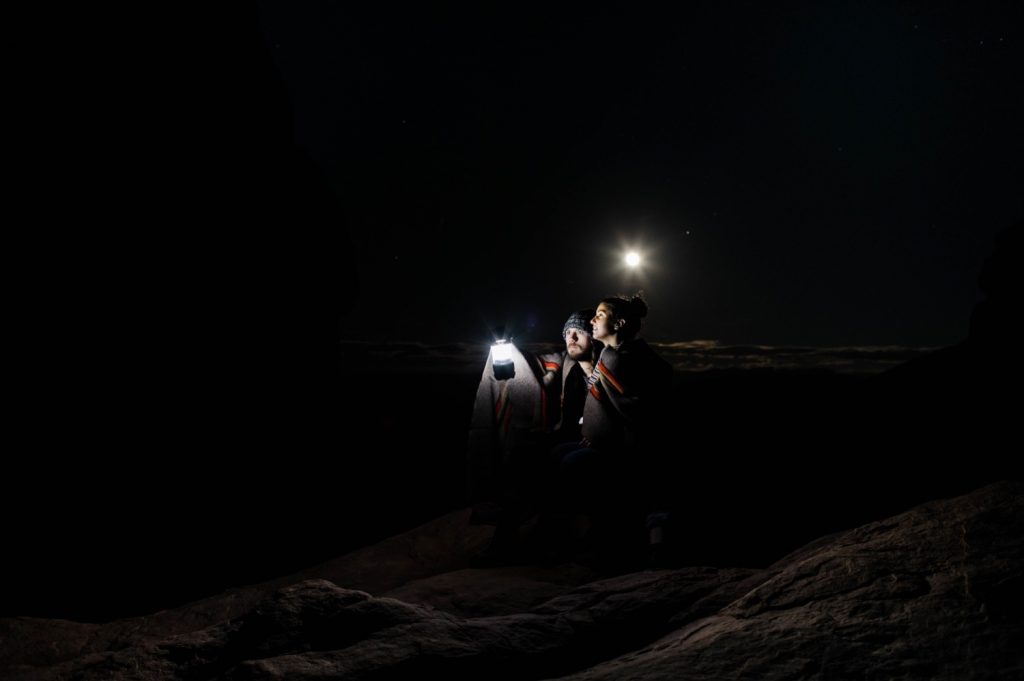 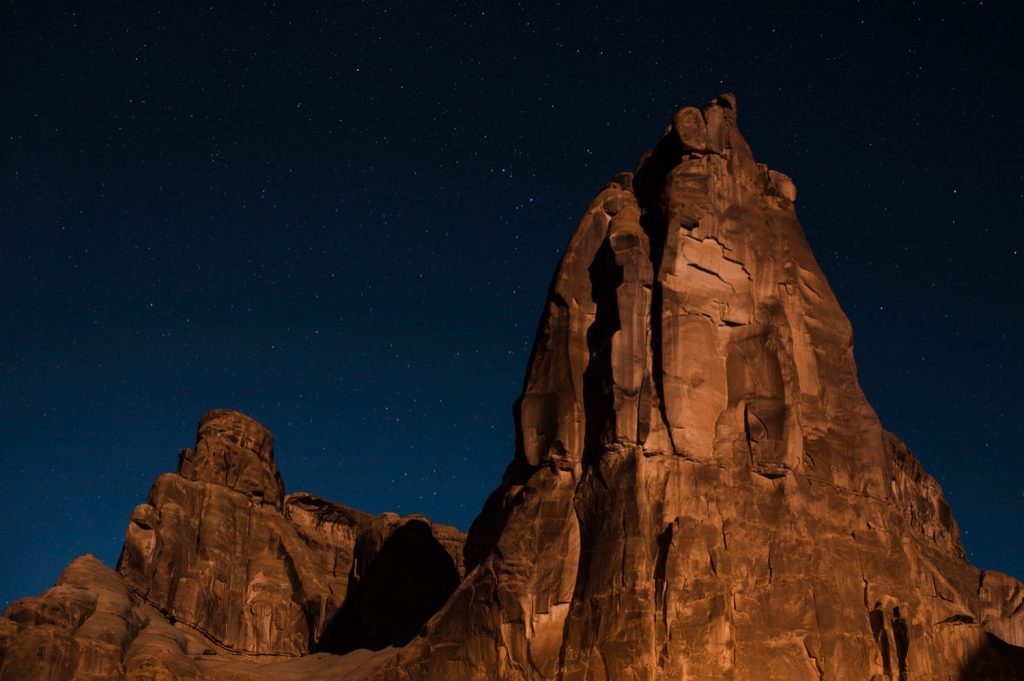 What Should We Do When Visiting Moab at Thanksgiving?

I won’t reinvent the wheel here. I’ve actually written a guide on my favorite things to do when in Moab to help get you started in planning your Thanksgiving Moab itinerary. 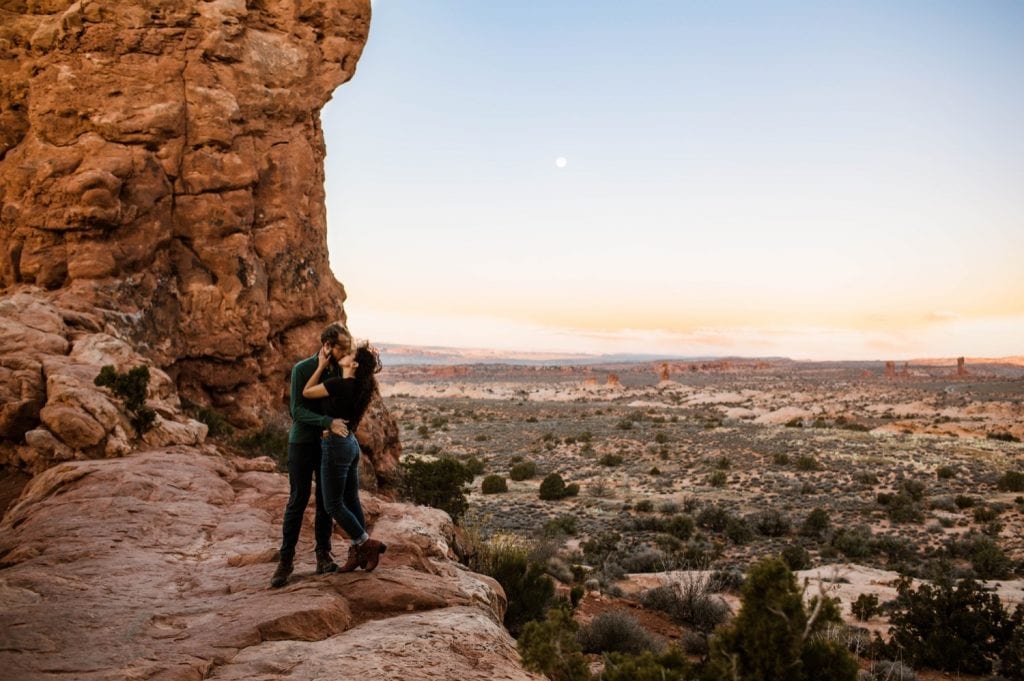 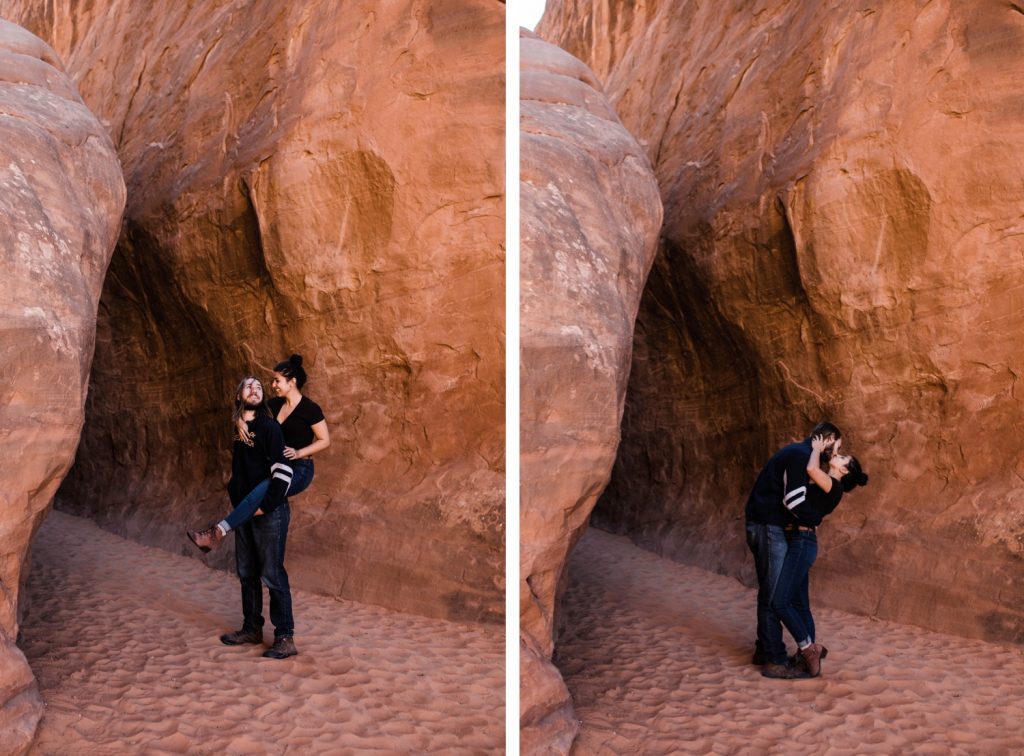 Where We Ate And Drank In Moab

While we certainly love packing our cooler full of snacks and drinks from home and picnic-ing outside, we did make sure to swing by a few local establishments for food and drinks.

Our favorite spots for food were Zax (if you’re feeling like pizza!) and Arches Thai. For coffee, we loved Moab Garage Co. They serve La Barba Coffee, which is my favorite whenever we’re in SLC. 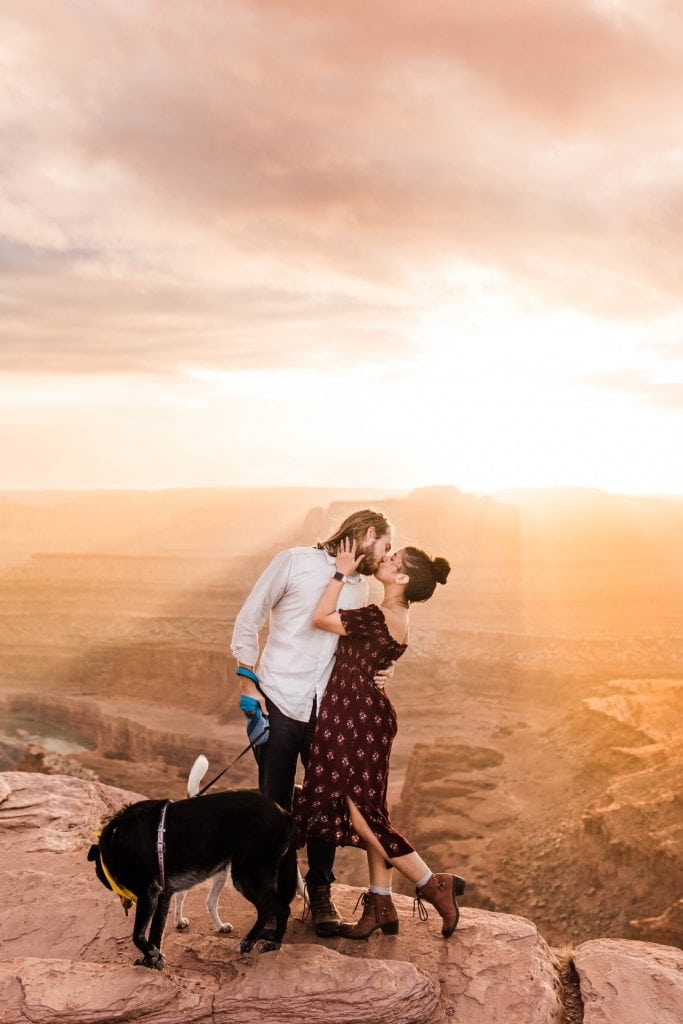 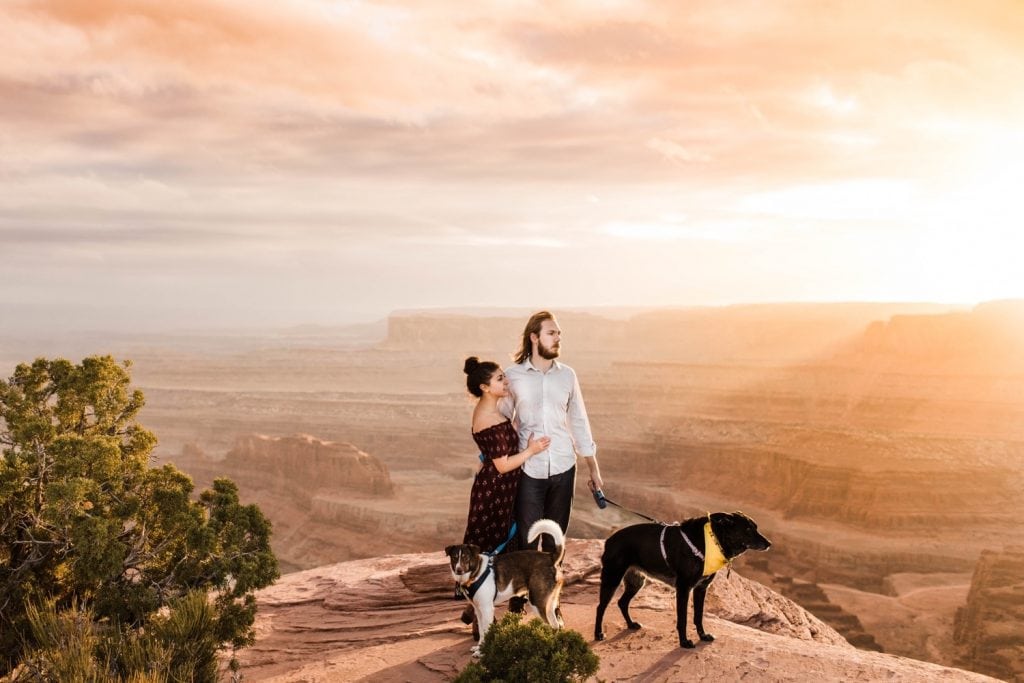 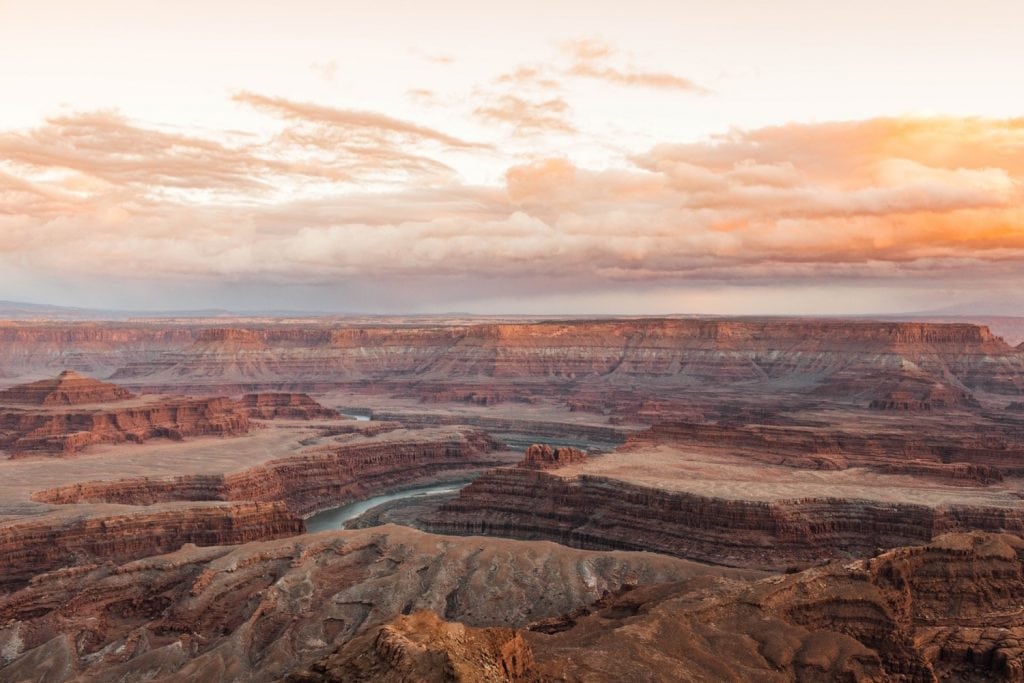 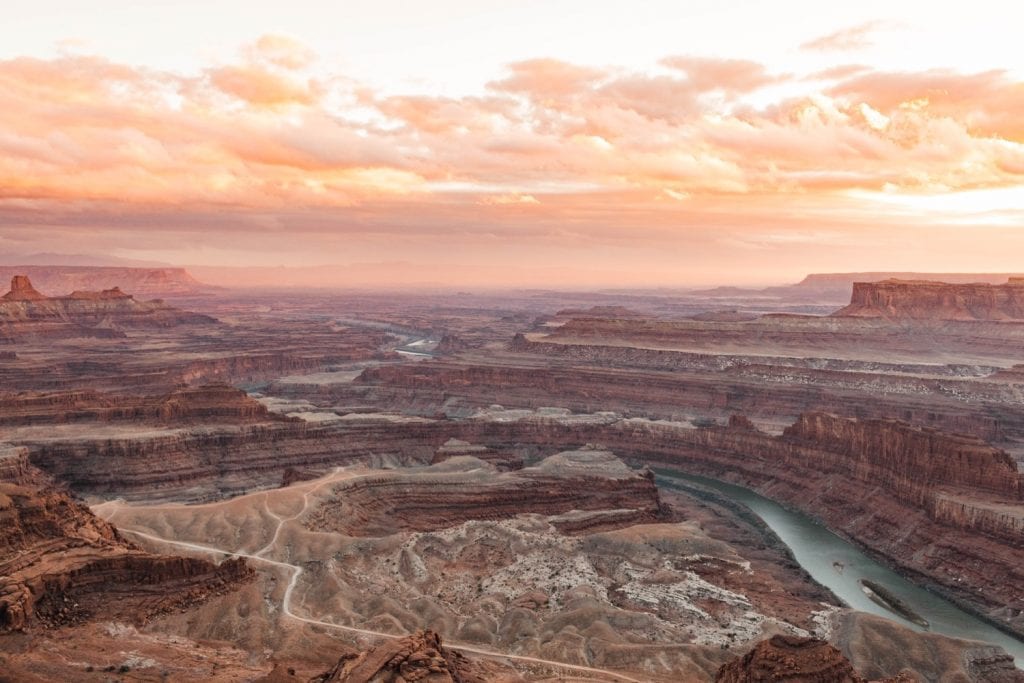 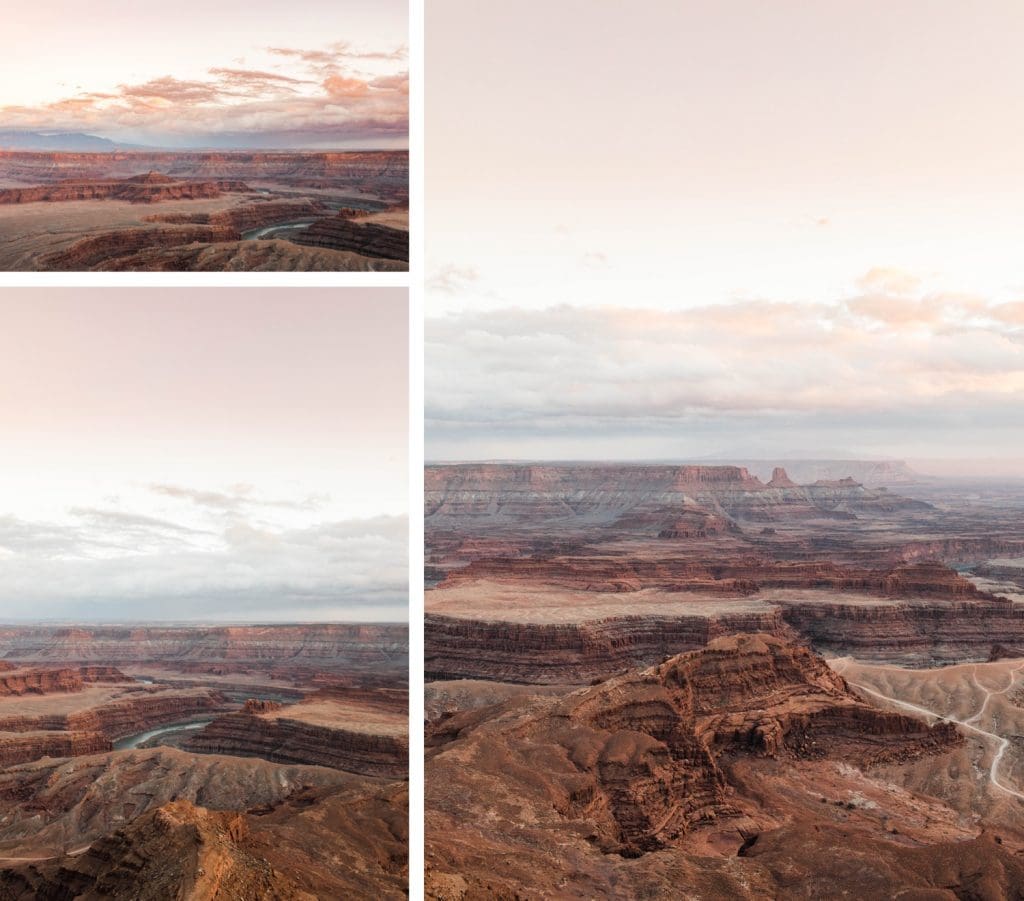 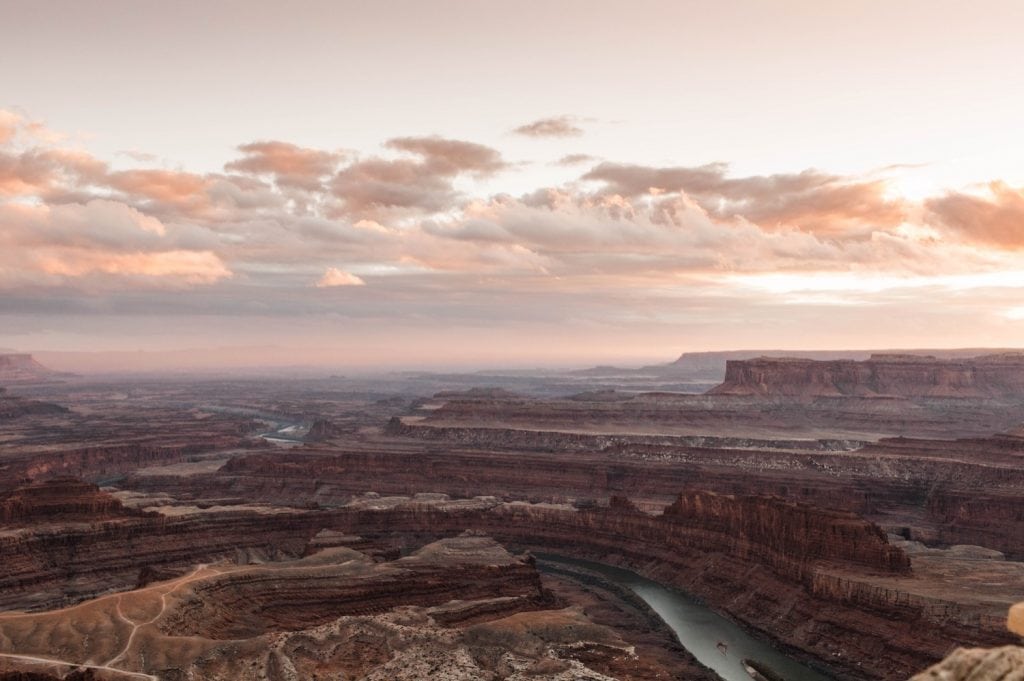 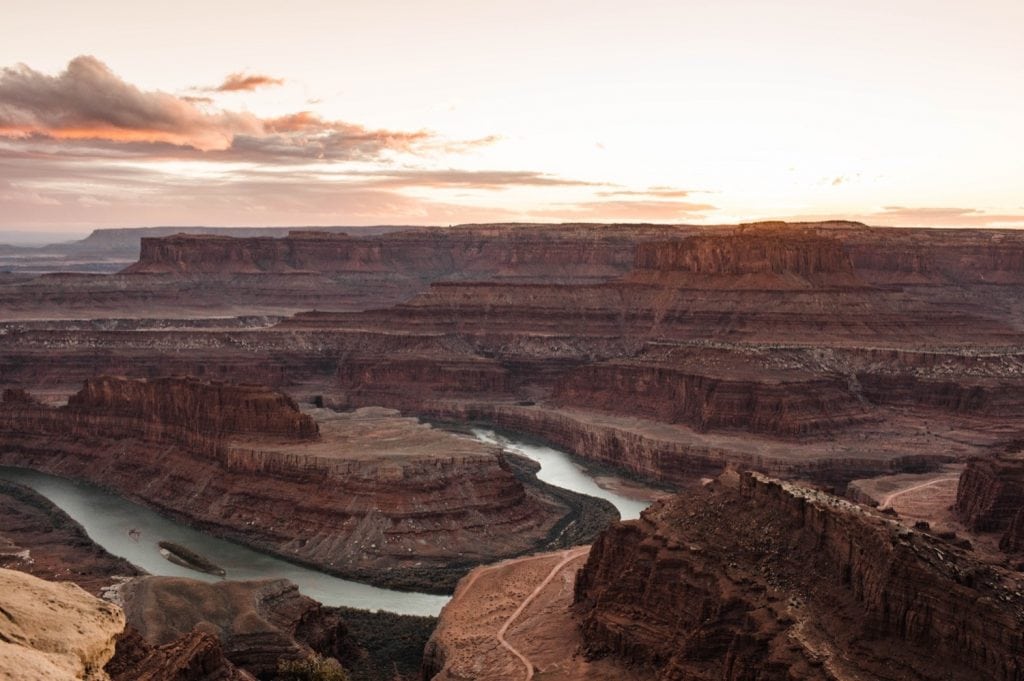 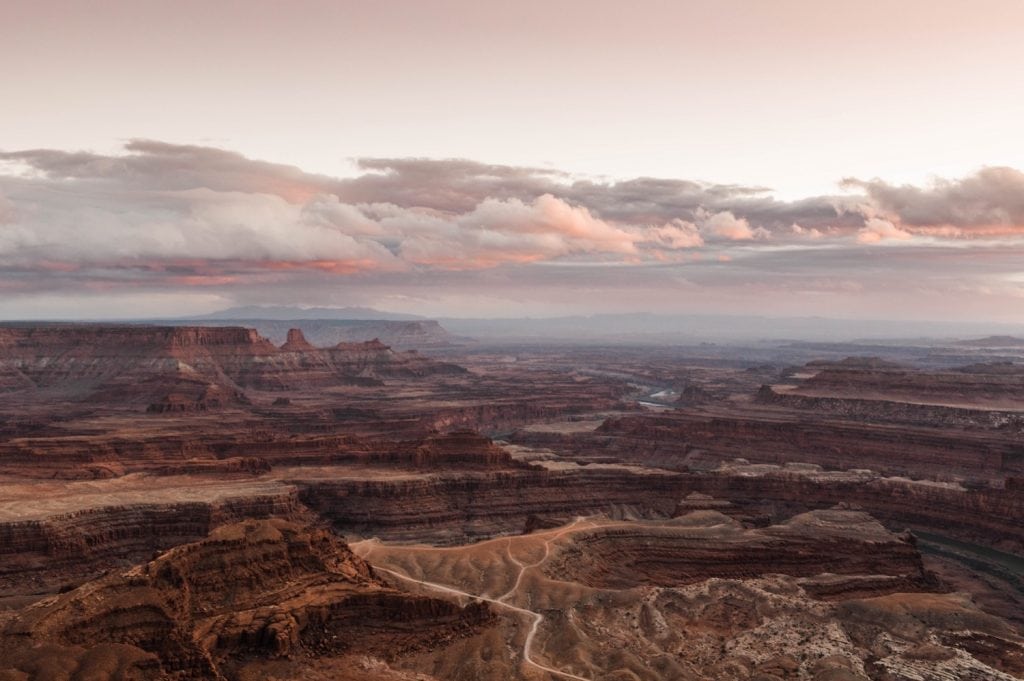 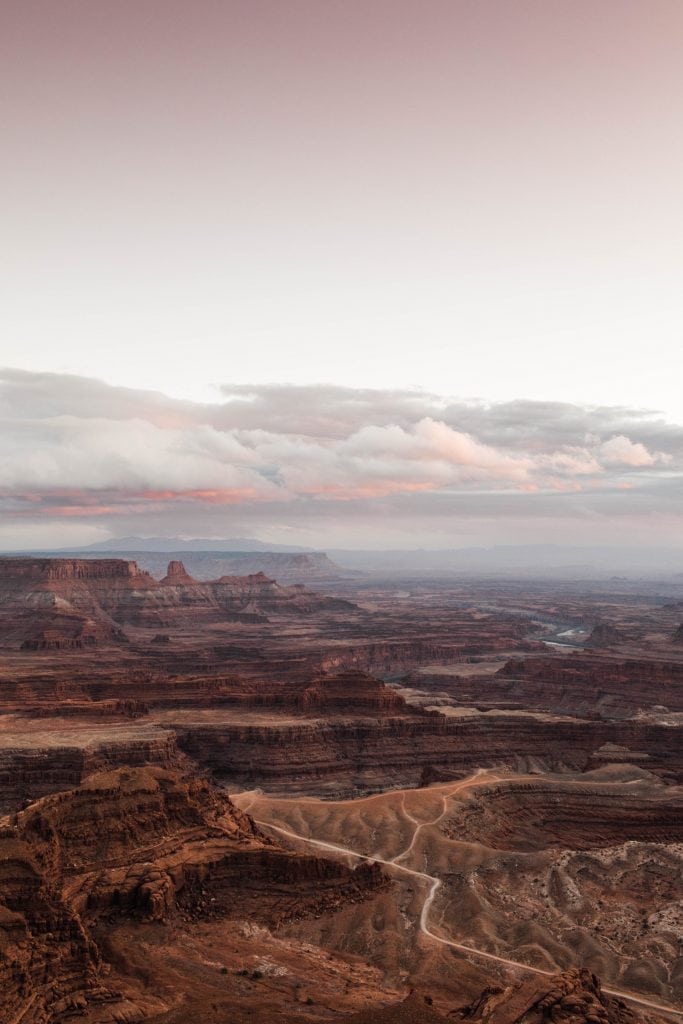 Traveling to Moab for Thanksgiving and looking for more Moab resources? I’ve got you covered. My list of favorite places and adventures to do in Moab covers the must-do’s.

How Much Does Eloping Actually Cost, Compared To A Big Wedding?