How to Plan Your Mountain Adventure Elopement 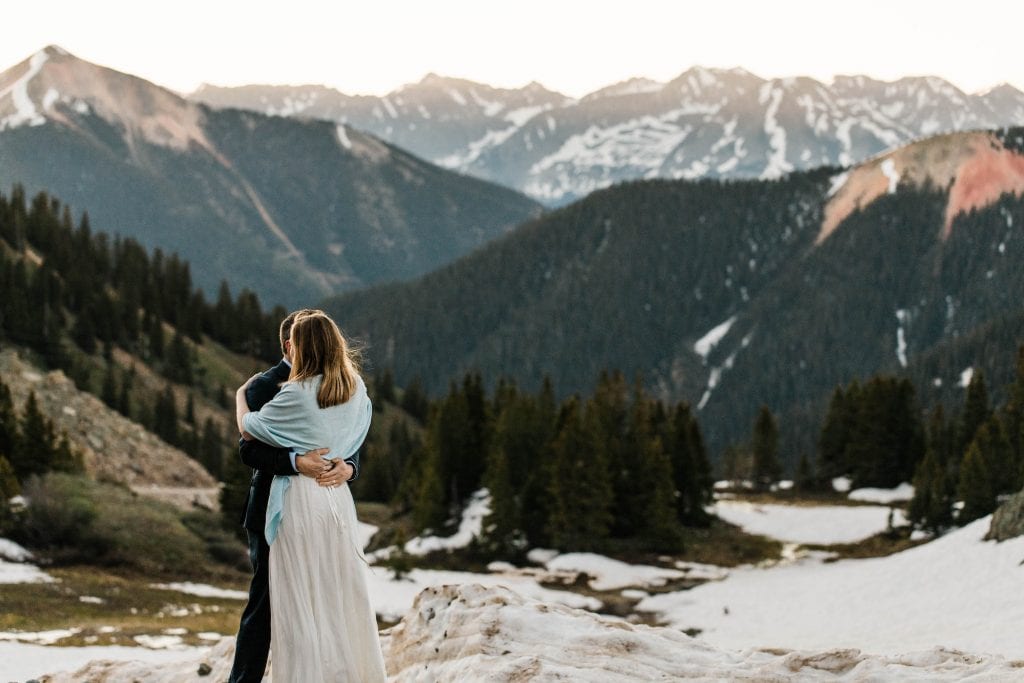 Key Things To Know When Planning Your Mountain Elopement

As adventure elopement photographers, mountain elopements are some of our favorite to be a part of, but there are definitely a few quirks you’ll want to keep in mind when planning yours. From the best time to have your mountain elopement ceremony to knowing which permits you need to acquire, we’re hoping this article will help you through all the little details of the elopement planning process.

Consider The Weather During Your Mountain Elopement: Storms In The Alpine Tundra

This is one of the things a lot of couples forget to consider when planning their mountain elopements, especially at higher elevations. The weather in the mountains — in particular the alpine tundra — can be extremely unpredictable. That’s a key reason we love recommending sunrise mountain elopement ceremonies over sunset ones; the weather in the high mountains is the most tame and predictable in the early morning. Another perk of going the sunrise route? You typically wind up having your mountain elopement location all to yourselves, especially if you have to hike a bit to get to the ceremony spot.

Make Sure You Acquire The Necessary Permits For Your Mountain Elopement

If you’re looking to elope in a national park or national forest, you’ll need to acquire the necessary permits. Some places will need you to have one permit for the elopement itself and another for your mountain elopement photographer to capture the event. These requirements will vary from park to park and forest to forest, so we recommend reaching out to the permit office to get the specifics from a ranger at your elopement location.

Keep In Mind: Some Roads And Mountain Passes Are Closed During The Year

This tip is especially important for couples looking to have a mountain elopement in places like Colorado or Washington, where late fall, winter, and early spring typically involve a hefty amount of snow in the mountains. Mountain passes and some roads in the national parks in these states are closed during a huge chunk of the year. There’s too much snow accumulation to make them safe to travel on during these times, which is why they are closed off to the public.

Mountain passes are some of the coolest places to have a mountain elopement, but if you want to take advantage of the epic views that come with them, we recommend having a summer elopement. While there are a few mountain passes that stay open in the winter months (we have a few secret ones that we love sharing with our couples!), that’s not always the norm.

When it comes to narrowing down the perfect spot for your mountain elopement, your adventure elopement photographer should be able to help you narrow things down. Speaking from personal experience, we help our couples source the best locations for their mountain elopements. We keep a list of the places we’ve visited and/or photographed, and we love recommending these places to our eloping couples.

P.S. As mountain elopement photographers who specialize in adventure weddings, one of our favorite parts of the job involves helping our couples find new and unique mountain spots for their elopements. We’re there for our couples every step of the way through the elopement planning process, so if that sounds like something you and your boo would love, we’d love to chat with you about your dream mountain elopement.

Chat With Us About Your Mountain Elopement!
PrevPreviousWaterfall Engagement Photos
NextHow To Choose The Best Shoes For Your Adventure ElopementNext

Why You Should Totally Do an Outdoor Engagement Session

Our Top 3 Tips For Planning Your Colorado Adventure Elopement