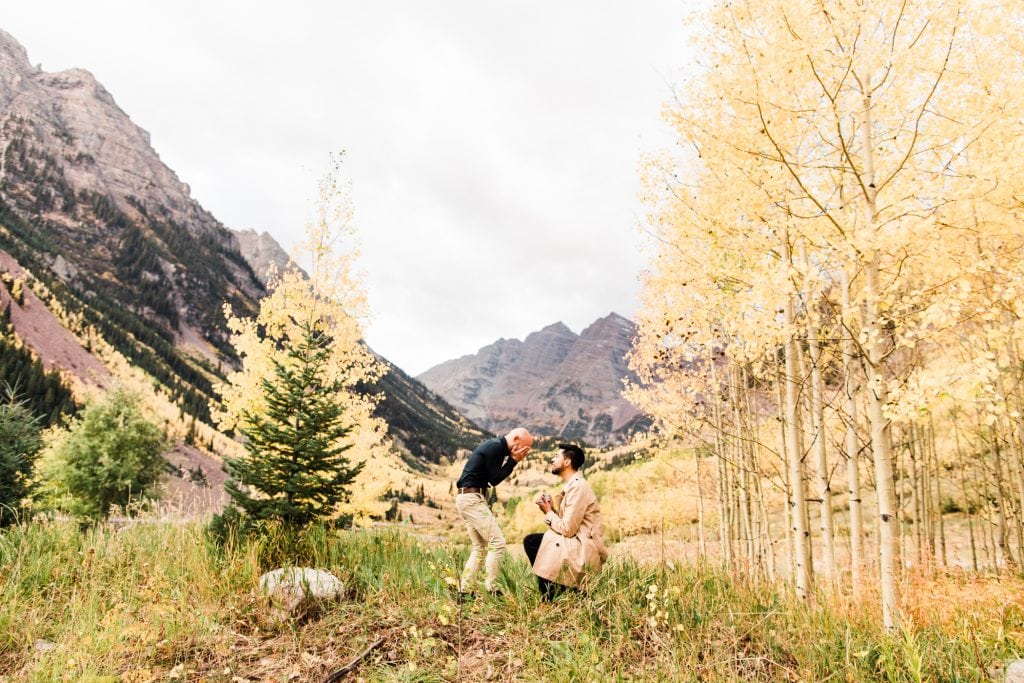 GUYS. We couldn’t be more excited to announce that our work has been published in one of the top wedding blogs out there, Green Wedding Shoes. Recently we had the honor of photographing a gorgeous surprise proposal over at the Maroon Bells in Aspen, Colorado. David had been plotting to propose to his boyfriend Rob for a few months when he reached out to see if we could document the moment for him. The second we heard his story and the beautiful ideas he had planned, we were so down. He and Rob are just about the sweetest couple alive.

The morning of the proposal (at 4 am, because we love a good sunrise session), we began our journey up to Maroon Bells, arriving well before dawn (one of our absolute favorite things to do with our couples). As far as Rob knew, David had booked an adventure couples session and nothing more. We had the chance to witness the quiet mountains before the crowds arrived and the silence was broken, and we snapped some night portraits of David and Rob as well. As the sun rose, these two played around in the open field while we captured them just existing in their element.

Not too long after, David pulled Rob aside to read him a sweet little note, something that Rob had done for David many times before. Except at the end of this note came a very important question. Rob wasn’t the only one who was reduced to tears in that moment. Not going to lie, both Ed and I lost it (Hey, what can I say? We’re goofy romantics over here).

After the proposal (and an overjoyed “YES!” from Rob), we continued on with our adventure session. From running down mountain roads to relaxing in between the aspen trees, David and Rob were embracing the magic of Colorado in the fall. And let’s just say those aspen trees were in full display for us. We stayed at Maroon Bells for a bit, and then made our way to one of my favorite spots outside of Aspen, where we went high enough in elevation that we hit a snowstorm.

From trekking through the snow, climbing rock walls, and racing through open meadows, David and Rob couldn’t have been more amazing to work with. Be sure to check out Green Wedding Shoes to get a peek at the photos from the day and get a glimpse into what it’s like in Colorado in the fall (hint: you can experience multiple seasons in a day).

P.S. Planning your own mountain couples adventure session or surprise proposal? That’s kind of our specialty. As elopement and intimate, small wedding photographers, we pride ourselves on not just documenting your special moments, but helping you plan out all the little details as well. Give us a shout. Something tells me we could create sparks together.